Do you ever wonder why certain content and ideas become very popular while others fail to gain traction? Derek Thompson’s book ‘Hit Makers: How Things Become Popular‘ takes an in-depth look at what makes a viral or popular product. The book doesn’t provide a secret formula for virality, however, it does provide detailed research on the key factors that can cause products to become popular.

Popular Products are MAYA — Most Advanced, Yet Acceptable

Thompson argues that the products that become popular are a balance of familiarity and newness. He quotes Raymond Loewy, the industrial designer, whose approach was summed up in his acronym MAYA — the “most advanced, yet acceptable” idea.

The theory goes that people are simultaneously Neophobic (afraid of the new) and Neophilic (attracted to the new). Thus new ideas, content or products need to manage this balance and tension. It is not the most innovative or advanced products that become popular but those that blend acceptability and innovation.

Thompson uses many examples where companies use familiarity including movies. Most of the top revenue grossing movies of the last ten years have been sequels or have been based on popular novels. There is safety and familiarity in such movies. It has also been argued that popular stories follow a familiar, if not a classic narrative arc such as good versus evil or a hero overcoming a challenge.

In much the same way vehicle manufacturers blend familiarity with newness by changing a car’s style every few years. Washing powders or cleaners have always had new and improved formulas for familiar products.

Familiarity makes you feel safe but Thompson argues there is also a need for newness. As there is a danger that too much familiarity, or too much of the same content, leads to a sharp fall in popularity. There needs to be a balance with newness and innovation.

Thompson argues that the MAYA concept also applies to ideas, as most people prefer ideas they already agree with or stories that they can relate to. Thompson believes that familiar ideas, or content that is simpler to process with less thinking, leads to more liking of the content. He quotes an interesting study where people were asked to either name two things they liked about their partner or ten things they liked. The study found that people liked their partner more if they were just asked to name two things they liked. When asked to name ten things it became harder and they rated their partners lower after the exercise. The same pattern was observed in discussions about politicians.

Products and ideas should also build on familiar concepts but add new perspectives. There is a case for doubling down on successful familiar content formats but also updating this content and doing new versions.

Content Doesn’t Go Viral, Not In The True Sense

Thompson argues one of the myths about the internet and marketing is that the traditional broadcast model is being replaced by content that goes viral through social networks. The myth goes that you no longer need mainstream TV or an article in the New York Times, to reach a large audience.

Thompson argues that in fact very little content goes viral in the strict sense of the word. It is rare that one person shares content with two others and each of those shares with two other people and so forth, creating an exponential viral pattern.

Thompson says “Marketers vastly overestimate the reliable power of word of mouth.” This is not to underplay the role of say Twitter or Instagram influencers but rather they are in effect another broadcaster. There is little evidence that what influencers share then gets shared virally eg each person reshares and their followers reshare in turn. This is consistent with our analysis of retweets of tweets by influencers. Even someone with say 500,000 followers may have a retweet rate of only say 20. Thus they broadcast to their 500,000 followers but few of their followers actually reshare and fewer again reshare those reshares.

Thompson quotes Yahoo research that shows “the vast majority of the news that people see on Twitter, around 95 percent, comes directly from its original source or from one degree of separation.” This suggests the way content becomes popular these days is through broadcast diffusion. This is a combination of sharing by multiple broadcasters as well as by individuals. Thompson refers to ‘dark broadcasters’ whereby the content is distributed to many viewers at once by different broadcasters but where this is not immediately visible to people and attributed to word of mouth. 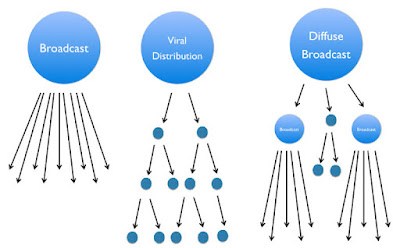 Many people argue that 50 Shades of Grey, which sold an astonishing 150m copies, was a word of mouth viral success. However, Thompson argues the author had already built a community audience and that the vast majority of the book’s publicity and success only came after the publishing deal with Random House. The New York Times ran a page one story on the deal within a week, the book was also on the cover of Entertainment Weekly, and the author was interviewed on ABC’s Good Morning America and NBC’s Today show. Just those four broadcast nodes have the potential to reach over 16m people.

Thompson argues the historic level of success of 50 Shades was down not to word of mouth but to broadcast diffusion, with multiple broadcasts that reached millions of people. The book then became even more popular just because it was popular, which we discuss next.

Look at adopting a diffuse broadcast approach to build popularity and awareness quickly. This can involve articles on major publications with large audiences and the use of high-reach influencers as multiple broadcasters.

Popularity Can Become The Product

Simply being popular can increase popularity, it is a tautology but it has implications for marketers. How many times have you seen the phrase ‘bestseller’ used to promote a book or author? Simply being a bestseller implies you will like the product as so many other people do. It provides social proof.

After reaching a tipping point Thompson argues that consumers do not just buy a product; what they really buy is entry into a popular conversation. No one wants to be the last to read or watch, so they buy to participate in the conversation. 50 Shades of Grey is a case in point.

Popularity is also used by algorithms from Facebook’s newsfeed to Netflix to recommend content, and can become a self-fulfilling prophecy The process of collaborative filtering takes what others have liked and recommends these to you. Thus if ten of your friends have shared an article or bought a movie it may be recommended to you.

Thus in this context it makes sense for companies to invest to get on a popular list or to heavily promote a product so that it becomes the topic of conversation. This is where paid amplification works for larger brands.

You want to gain social proof quickly.  It is definitely worth the effort to get your content shared simultaneously by multiple influencers and to encourage upvotes or shares.

Quality Matters But So Does Distribution and Promotion

Creating quality content such as a great song or a great article is not enough for it to become popular. There are simply too many good songs and articles around. Quality is a necessary but not a sufficient attribute to become popular. Nobody will beat a path to your door. You need distribution and amplification.

However, no amount of advertising or exposure can make bad content become popular. Distribution is a winning strategy to make a good product popular but it is not reliable way to make a bad product popular. Thus popularity requires a minimum level of quality.

Distribution is not all about advertising or traditional broadcasts to large audiences. The Internet and its social networks do provide forces of amplification, extending messages to larger audiences. Whilst it is rare there are examples of viral community distribution.

Thompson argues that a smaller, densely connected audience beats a larger, diffuse group. He uses Tindr as an example, arguing that it piggybacked on tight networks that already existed, such as popular fraternities and popular sororities that had relatively well connected and trusted networks. These dense and trusted networks are the closest to true viral networks where people will reshare. By getting existing connected networks to adopt your product you can gain from community distribution.

In much the same way the best opportunity you have for viral distribution is your own network. Your own trusted audience is more likely to reshare your content. In simple terms your network is your power.

Look to make meaningful connections with dense, well connected networks, where you can add value. Also continuously build your own network and trusted audience as they are most likely to share your content.