The ‘red wall’ concept was initially developed during 2019 by Tory pollster James Kanagasooriam, an advisory board member of Onward and a strategy consultant at OC&C. He first mentioned the concept in a tweet of August 2019, as part of a 16 part Twitter thread. 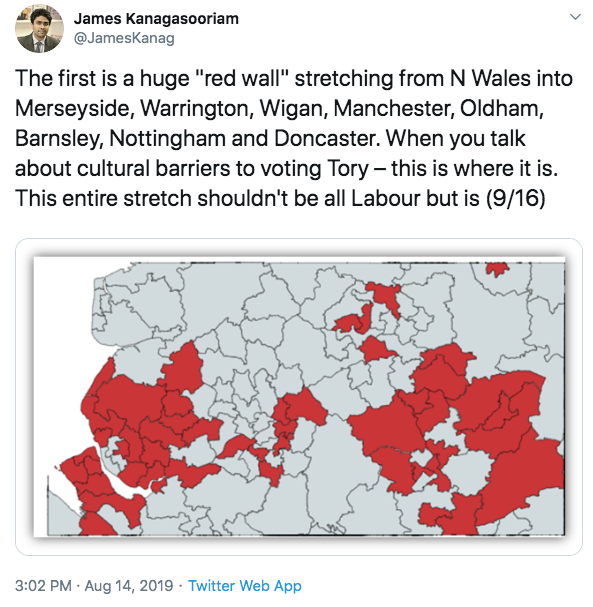 According to Kanagasooriam “the red wall is dominated by rural, small market-town seats which hug the more diverse safe Labour seats in the cities of the Midlands and the north” (Kanagasooriam, 2019). In a tweet of 1st November 2019 Kanagasooriam referred to 40 seats in the ‘red wall’. He defined ‘red wall’ seats as those that on a demographic basis should have a higher Conservative vote.


Political journalists took up the concept of the 'red wall' as a heuristic or shorthand for traditional Labour seats in the midlands and the north. The Sun defined the ‘red wall’ as 27 seats in the north and midlands which had been held by Labour for many years and which all fell to the Conservatives in 2019 (Cambridge, 2019). ‘Europe for the Many’ defined ‘red wall’ seats as the Brexit voting towns of left behind Britain, namely areas with low house prices, low wages, low ethnic diversity, a large older population and low numbers of graduates (Cooper and Cooper, 2020).

For many journalists the 'red wall' simply meant Labour held seats in 2019 rather than seats which had been Labour controlled for decades. Labour held seats in 2019 included many bellwether seats which have often swung in line with national trends. This caused the 'red wall' concept to be criticised for  being widely drawn and containing politically diverse seats, including both bellwether seats and former Labour heartland mining and industrial seats (Bastion, 2019).  For example, seats such as Warrington South, Bury North, Keighley, and Stockton South are bellwether constituencies which typically swing in line with national trends. These seats are in stark contrast to seats such as Workington, Rother Valley, Don Valley and Bassetlaw which were held by Labour for over 90 years.


In 2019 there was a dramatic swing in many traditional Labour seats where hundreds of thousands of former Labour voters switched directly to  the Conservatives. This was exemplified by the highest ever swing from Labour to the Conservatives, an astonishing 18% swing in Bassetlaw. In many ways 2019 was the continuation of changes that took place in the 2017 election which saw the highest ever recorded level of Labour to Conservative vote switching, measured as a percentage of the Labour and Conservative voters. Voters in seats which had been Labour Towns for decades were switching directly to the Conservatives both in 2017 and 2019. This is exemplified by Mansfield. The constituency was held by Labour for 90 years until 2017. In 2019 the Conservatives didn’t just win the seat, they won 64% of the vote and now have a 16,000 majority. It is now a safe Conservative constituency. Mansfield is not an isolated example, a number of similar seats now have Conservative majorities of over 20 per cent, such as Dudley North (31.3 per cent), Bassetlaw (27.6 per cent) and Great Grimsby (22.2 per cent).

I think it is useful to define the 'red wall' seats that Labour lost to the Conservatives as 41 seats which were historically held by the Labour Party for many tens of years, over 90 years in some cases or since their creation. These are seats where there were cultural barriers to voting Conservative, as Kanagasooriam identified. These are seats which voted to Leave in the EU referendum, and which have been identified as culturally conservative. These 41 seats are set out in the table below. Six are in the east Midlands, ten are in the West Midlands, seven are in the North East, nine are in the North West, five are in Yorkshire and Humberside and three are in Wales. The seats tend to be more rural, outside or on the edges of major cities and populated by smaller towns. 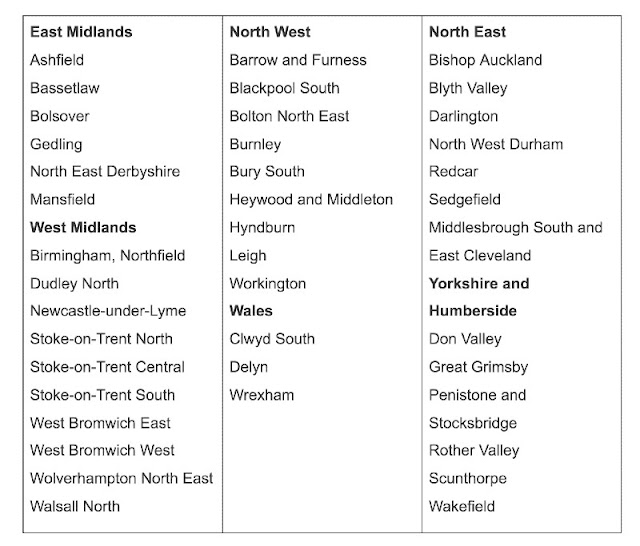 These 41 ‘red wall’ seats were collectively held by Labour for over 2,300 years (over 57 years on average) before they were lost to the Conservatives.

These seats exclude bellwether seats, however, the group of 41 does include a couple of constituencies which are slight anomalies, in that they have not been held consistently by Labour for the last 40 years or more. For example:

Given the economic and demographic nature of these constituencies, their long history of Labour voting and the fact the Conservatives had never won them, they have been included in the group of 41 ‘red wall’ seats, though one could make the case for their exclusion.

Also included in the group of 41 ‘red wall’ seats are five seats which were actually won by the Conservatives in 2017. These were arguably the first ‘red wall’ seats to fall post the 2016 EU referendum. These constituencies are Derbyshire NE, Mansfield, Middlesbrough SE & Cleveland, Stoke on Trent South and Walsall North. These five seats were held by Labour continually for an average of 65 years each prior to 2017, with the exception of Walsall North which was held by the Conservatives for three years following a by-election in 1976. Again given their long history of Labour voting and their economic and demographic make-up they have been included as ‘red wall’ seats.

It is also important to recognise there are also very similar ‘red wall’ seats which the Conservatives failed to win in 2019 such as Hartlepool, where the Brexit Party may have saved Labour. There is an argument for including these seats as they were Conservative target seats with very similar characteristics. There are also many large city seats in the Midlands and the North which would be seen as part of the original 'red wall' which are still Labour. I am looking here at the 'red wall' seats lost by Labour.


In discussing the 'red wall' seats that Labour lost it is important to be clear what seats are included and why. In this post I have attempted to define a set of seats that were traditionally Labour seats rather than bellwether seats where voters switched directly to the Conservatives in 2017 and 2019.

The real question raised by the 'red wall' is why voters in these long standing seats switched to the Conservatives in 2017 and 2019? If we look at long term voting trends in these seats we can see the answer is more nuanced and complex than simply pointing to Brexit and Jeremy Corbyn. 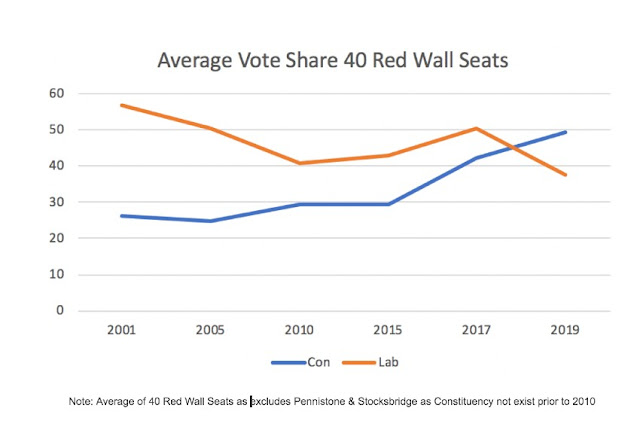 Over a period of twenty years Labour's vote share has declined in these seats while the Conservative vote has increased. Political sociologist Paula Surridge points out “while it is accurate to say that Labour has been gaining seats that voted remain and losing seats that voted leave in the EU referendum it was doing so in 2010 and 2015, prior to the formation of ‘leave’ and ‘remain’ identities in the electorate. Labour was losing leave areas in 2010 before Brexit was a politically salient issue” (Surridge, 2020). The Tees Metro mayor, Conservative Ben Houchen also commented ‘If you look at every general, local or European election since 2005, Labour have gone backwards in this region.’

The key questions for Labour to answer is what happened in these 41 seats since the millenium and can they win these voters back?