Labour to Conservative Vote Switchers in 2019

The BES panel data includes 1077 voters nationally who voted Labour in 2017 and switched to the Conservatives in 2019. This data helps us to build a profile of the people who switched directly between the two main parties.

The data reveals that 55% of switchers from Labour to the Conservatives were 56 or over and 77% of switchers were aged 46 or over.  The chart below shows the age profile of those that switched vote. 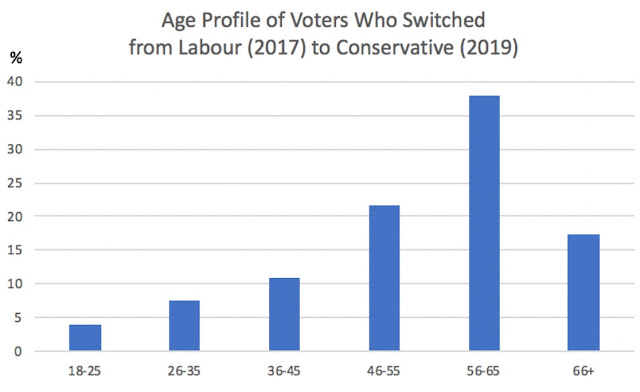 Given the conservatives perform much better amongst older people this data comes as no surprise. However, this profile of switching, if representative, would have hurt Labour more in 'red wall' seats where the population is slightly older.

The data reveals a very strong swing from Labour to the Conservatives amongst retired people. The table below shows the proportion of such vote switchers by employment category. 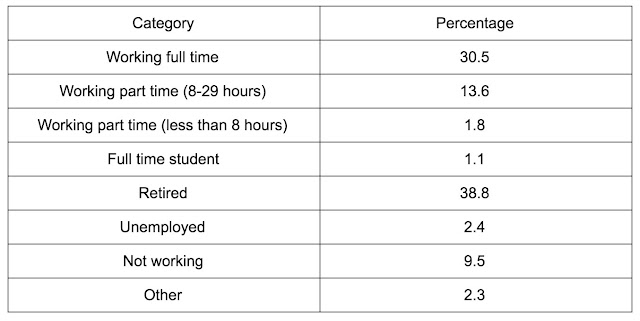 Over 38% of Labour to Conservative switchers were retired. The average proportion of retired people in constituencies in England, Scotland and Wales according to the 2011 census was 14.28%. My analysis of 39 'red wall' seats shows that on average 23% of the population in these constituencies is retired. Thus this profile of vote switching by retired people will have hurt Labour disproportionately more in these 'red wall' seats.

The data also shows that 94% of people who switched from Labour to the Conservatives identified as White British. Again this will have hurt Labour more in 'red wall' seats which have a higher proportion of White British voters than average.

The data shows that 79.5% of Labour to Conservative switchers identified with the Leave side of the EU referendum debate. This is the group to whom the 'Get Brexit Done' message was targeted in 'red wall' seats.