Political podcast listening has increased significantly over the last two years and raises questions about adoption patterns in society. Who listens to these political podcasts? My recent survey of 1,346 listeners has found the audience is overwhelmingly male, highly educated and relatively wealthy. The average age of a listener is 41. Listeners discover political podcasts socially with 60% finding podcasts by word of mouth and 46% through social media. There is also a core of committed podcast listeners with 32% of the audience reporting to listen to five or more political podcasts a week. The audience characteristics are similar to an audience study, published earlier this year, of the popular Making History podcast (covering science, history and politics) in Israel which found that 90% of listeners were male, mostly 26 to 45 and well educated with relatively high incomes.  The full details are set out below.

For those interested I have included a short section about my research project at the end of this post.


The overwhelming majority of listeners in the sample, 71%, were men.

This male dominance could be due to sample recruitment bias, for example men being more likely to self-select and make their views known and/or promoting the survey on social channels that have a majority male audience. However, the Israel study found 90% of Making History podcast listeners were men and the RAJAR 2018 survey (n=2,332) found 60% of all podcast listeners were men. The Infinite Dial 2018 research in the United States found 36% of men listen to podcasts of all types compared to 29% of women. This all points to a majority male audience for political podcasts.

The average age of political podcast listeners in the sample was 41. The largest single age group is 25-34 but there are also many older listeners.

The age profile of listeners is shown in the histogram below. 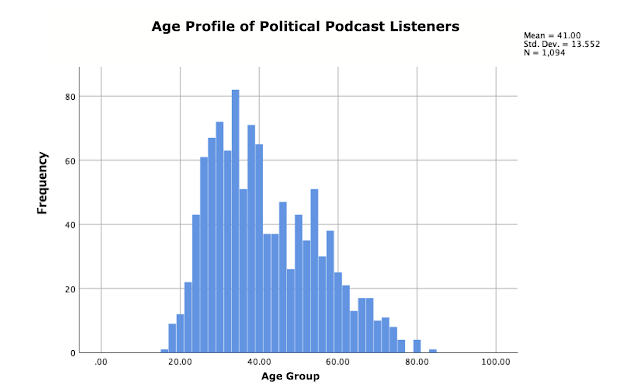 Four recent podcast audience surveys (Edison, 2019; RAJAR, 2018; Westwood One, 2018; Chan-Olmsted-Univeristy of Florida, 2019) have all found less podcast listening amongst the over 55s. There is less agreement on age profiles, the Rajar report found 48% of listeners were below 35, which aligns with the Edison research while the Israel study found most listeners were 26 to 45. Recent University of Florida (n=2000) research found an average age of all podcast listeners of 26. The age group comparisons between my survey and the University of Florida survey are shown below. 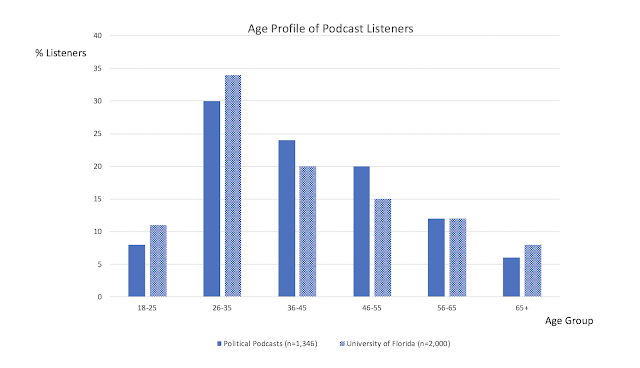 The ethnicity of podcast listeners as found by my survey is shown below. The audience is 92.6% white compared to 82% in the UK population (2011 census).

The primary employment status of listeners in the sample is full-time employees. However, there is a broad spread including 10% students, 14% self-employed and 7% retired.

The audience in the sample is highly educated with over 56% having a postgraduate qualification.

This aligns with previous findings. The Israel study found 73% of listeners had a degree or post-graduate qualification. The figure for political podcast listeners is a remarkable 90%. This may reflect the fact most respondents listen to Talking Politics hosted by Cambridge professor David Runciman, where the survey was promoted, and which the Daily Telegraph calls Britain's brainest podcast.

The audience in the sample is also relatively wealthy with 31% having a household income in excess of £80,000.

Political podcast listeners appear to be very committed to the podcasts they select to listen to. Almost 80% of respondents in the sample said they listen to the whole episode.

This data on podcast listening is probably skewed by the fact the survey promotion on the Talking Politics podcast was right at the end of the podcast. Thus by definition only those that listened until the end of the podcast heard the promotion. I therefore did a separate analysis excluding Talking Politics listeners. This still revealed that 67.3% listen to the whole episode and 28.8% most of it. This is very similar to the RAJAR 2018 finding that 68% of listeners listen to the whole episode when they listen to a podcast. The figure is good news for podcast producers seeking to sell advertising slots later in podcasts. Podcast listeners actively select podcasts to listen to and often appear to become fans of these podcasts.

Podcasts are by their nature very portable allowing people to download and listen while out and about as well as at home on a range of devices from Alexa and Google Home to devices to computers and laptops and smartphones. The place where people listen most to political podcasts is at home, with 76% listening at home. 62% also listen to political podcasts while commuting and a further 51% listen while walking.

These findings raise questions about the adoption of podcasts in society. While podcasts potentially provide a form of linking capital allowing people to bridge social groups and listen to expert commentators, it appears that political podcasts are primarily utilised by those already privileged with discovery through social connections. Thus political podcasts may primarily benefit this privileged group through further enhancing their cognitive social capital.

My research is designed to explore the socio-demographics of the political podcast audience, their main uses and gratifications, and the relationship between political podcasts and social capital. The research draws on uses and gratifications theory (U&G), social capital theory and the intimate bridging concept (Swiatek, 2018).

My first research question is: what are the socio-demographic characteristics of podcast listeners? The initial high level findings have been outlined above.

My second research question is concerned with motivations, uses and gratifications. The recent Making History podcast study found two major motivations. Firstly, a cognitive motivation to acquire and develop knowledge. Secondly, a social motivation including the distribution of information about podcasts to social groups. My research is designed to explore the motivations of those listening to political podcasts and specifically the relationship between socio-demographics characteristics and motivations and uses.

Finally, my third research question is concerned with social capital and political podcasts, specifically the cognitive and social gratifications gained by political podcast listeners. The Israel study notes that many podcast listeners feel like they become opinion leaders after gaining knowledge from podcasts, and that "appearing as highly knowledgeable, particularly in the stronger status groups ..is highly desirable."  My research is interested in this cognitive social capital which includes social utility, for example feeling more confident in discussing politics after listening to political podcasts and other forms of cognitive social capital, for example being respected or having social standing due to political knowledge.