This week we have been studying Jodi Dean's theories of Communicative Capitalism. In essence Dean argues social media is depoliticizing and that notions of political activity online are effectively fantasies that do not change anything fundamental. It is a pessimistic view of the affordances of social media to social and political movements. Tonight I attended a lecture my Helen Margetts of the Oxford Internet Institute who had an alternative view. 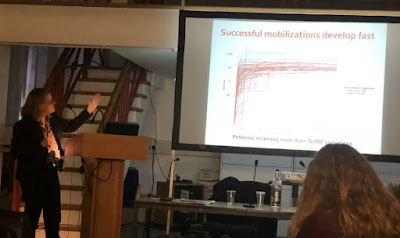 Margetts in her 2016 book Political Turbulence, along with co-authors John, Hale and Yasseri, explores the relationship between social media and collective action. The team used big data to analyse patterns in social movements and mobilisation using social media.

The research found that while it may be incredibly rare, small acts of political participation can scale very quickly to have real impact such as political and social change. The examples Margetts gives includes Podemos, which started as a movement on social media and the Arab Spring where social media facilitated the organisation of mass demonstrations. It wasn't mentioned by Margetts but you could possibly add the recent Armenian revolution to that list.

Most political mobilisations on social media fail but the very few that succeed achieve mass mobilisation very quickly. Collective attention decays in a very short period of time, thus mobilisations have to achieve scale almost immediately. Margetts shows how this works with online petitions. The petitions that achieve millions of signatures achieve scale incredibly quickly, they do not gradually accumulate signatures. Over 99% fail to mobilise significant support immediately and fade into obscurity. You can see exactly the same profile with YouTube videos where the popular videos take off from day one.

This reflects the power law on the internet. Attention is concentrated on very few books, articles, videos or musicians. There is not a normal bell curve distribution of attention, it is massively skewed to those books or songs that succeed and all of the others receive almost no attention in relative terms. Derek Thompson in his book The Hit Makers demonstrates how popularity generates even more popularity. Thus a book that makes it to the New York Times bestseller list can really take off and become a viral hit. This early popularity creates visibility and social influence, thereby generating the potential for something to go viral.

When the UK Government petitions site started showing trending petitions, there was a resulting concentration of signatures on fewer petitions. The popular petitions gained more signatures and the others received less. This aligns with previous research which found that simply telling people that particular music was popular resulted in more people liking that music (Salganik, Dodds and Watts, 2006). Similarly when sites show the most popular or trending stories it further enhances their popularity. Thus social influence can increase the potential chances of success but does not guarantee it.

Margetts is keen to point out that there is an element of randomness to the mobilisations that break through and scale up. This is what gives rise to unpredictability and volatility. In political terms this makes the world more unstable as mobilisations can happen very quickly from nowhere, hence political turbulence.

Margetts believes the dynamics of mobilisation are influenced by:

- visibility, where actions are visible to others
- social information, that provides real time information about what other people are doing

We need new ways of understanding this world and Margetts has been developing a theoretical model of chaotic pluralism, which she sees as the most viable democratic model going forward in this new world.