National Populism: Notes On A Talk By Matthew Goodwin

Emmanuel Macron's current approval rating is 24%, by contrast Matteo Salvini's approval rating in Italy is 60%.  Across Europe we are seeing the rise of national populists. It was therefore interesting to listen to Matthew Goodwin this week, discussing his new book National Populism: The Revolt Against Liberal Democracy, jointly authored with Roger Eatwell. Here are my takeaways from the talk.

Many journalists and politicians argue populists have stolen elections and referendums through dishonesty and underhand tactics. For example the £350m on the side of the Leave campaign bus or Trump's use of Facebook ads. By contrast Goodwin and Eatwell argue that national populism is driven by four long term trends namely distrust, deprivation, destruction and dealignment.

Goodwin started by addressing some of the myths of populism, such as it is all driven by old white men. For example, 41% of white millennials backed Trump and Le Pen is very popular among younger French people. This can be seen in 2017 poll data reported by the Financial Times. 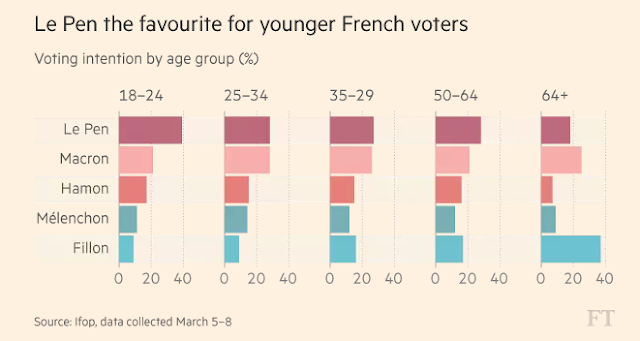 Goodwin addressed the issue of distrust and how strong distrust for those that run society leaves open space for populists to claim to represent the people. This is partly due to the changing nature of democratic representatives. Only 3% of UK MPs have experience of blue collar work and 86% of MPs have university degrees (Independent). Many people feel they are not represented and that their voice doesn't count. The Euro Barometer survey shows that whilst it has improved recently, forty nine per cent of people still feel their voice doesn't count in Europe. 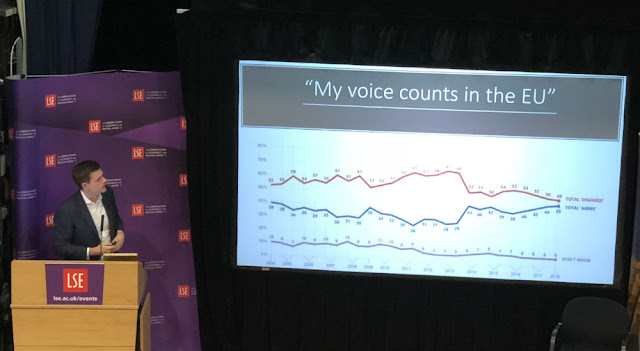 People also have concerns about the scale and depth of change taking place in society. Goodwin reported that the top two issues of concern for many Europeans were immigration and terrorism. In Eastern Europe populations are falling dramatically as people leave for Western Europe under freedom of movement, see my previous post on this with the data. These states will either need to attract people back to their country or have mass immigration which is politically very difficult.

Capitalism is creating a more insecure workforce accompanied by growing inequality, wage stagnation and less state intervention and services. One of the factors driving populism is relative deprivation, people feel they are being left behind relative to others. Most people feel the future will be worse than the past and most parents feel their children will be worse off than they are. As importantly, people feel they have less dignity due to temporary contracts and  lower pay. Goodwin argues the left are outflanking the left on economic security. The recent statements by Steve Bannon and Le Pen highlight this:

“I see what globalism did to the workers”, “we are trying to make this a workers based economy”, “We need to protect citizens, particularly workers”, “The elites, the party of Davos took care of themselves”, and we want a “society where workers can get a piece of the action.” Steve Bannon


“We are in a world where globalization, which is an ideology, has forgotten and put aside the people, the people's interests, aspirations, and dreams.” “I'm a democrat. I will fight until the end to defend democracy and the will of the people.” “We're going to reserve our efforts and our national solidarity for the most humble, the most modest, and the most poor among us.” Marine Le Pen


There is also a dealignment taking place where people feel less aligned with political parties. In Sweden party alignment has declined from 65% to 25%. This dealignment makes politics more volatile as people switch between parties. 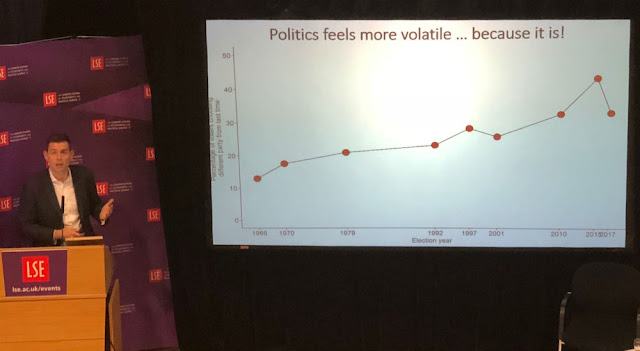 There are also people returning to politics who haven't voted. The AFD's main source of votes in Germany has been non-voters. The volatility is marked by new parties being formed and winning elections with a matter of a few years. The top predictor of someone voting for national populists is their view on immigration followed by their level of distrust in politicians.

In summary, Goodwin sees Populism as a thin ideology (people versus the elite) which can attach itself to other things. It does have a sense of community which gives national populists potency. These national populists do not see the nation in ethnic terms but a shared language, culture and customs. Goodwin argues it is a cohesive ideology which aims to bring certain groups together and is very different from the recent forms of identity politics which emphasises what differentiates people. Goodwin finished by pointing out that the problems in Europe may be only just beginning as the population is forecast to age significantly.