What I Learned From An Analysis of 1.3 Million Articles About Brexit

The UK's vote to leave the European Union in 2016 led not only to intense debate and discussion, it also prompted over one million articles to be written about Brexit. In a fit of summer madness I decided to analyse these articles. These are my key findings:

Full details of my analysis and findings are set out below.

It can be difficult to define when an article is about Brexit. I did consider applying a machine learning algorithm to the billions of articles published since 1st January 2016 in order to classify those about Brexit but this is probably something for academic researchers with more time and resources than I have. For this exercise I simply took all articles where Brexit appeared in the article title from January 2016 to 21 August 2018. This gave me 1.362m articles from the BuzzSumo database.

The chart below shows that there was a spike in articles about Brexit when the referendum took place in 2016. Since that time over 30,000 articles are published on Brexit most months and in July 2018 there were over 49,000 articles published. 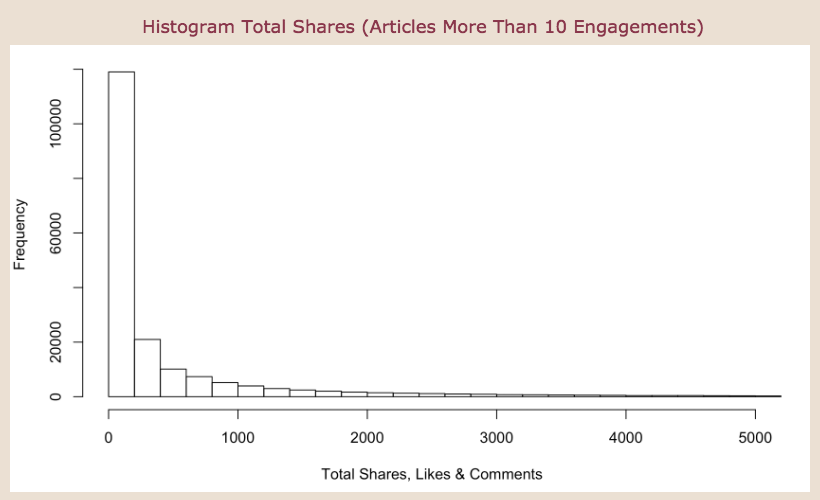 Some very interesting patterns emerge when we look at total engagements by domain or website. Articles from just three websites account for almost fifty per cent of all social engagement as we can see from the chart below. Only domains that published at least 5 articles about Brexit are included in this analysis. 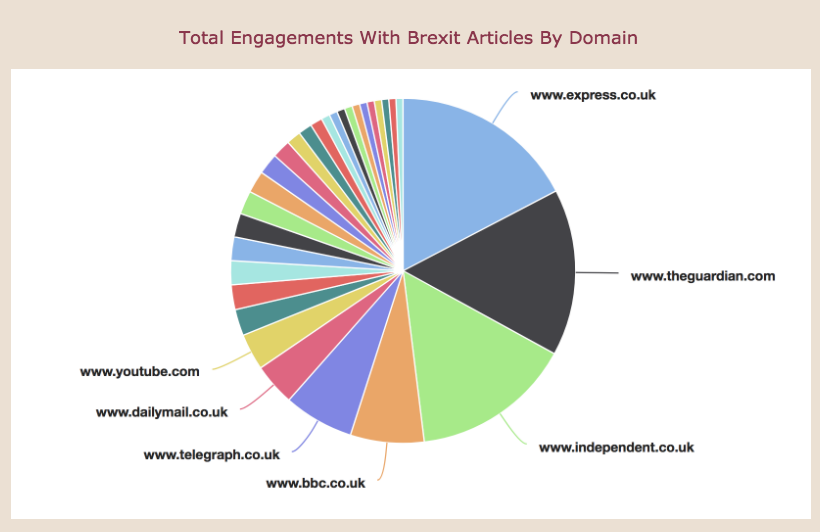 The table below sets out the key data for the chart. These are total engagements for all articles with Brexit in the headline published from 1st January 2016 to 21st August 2018. 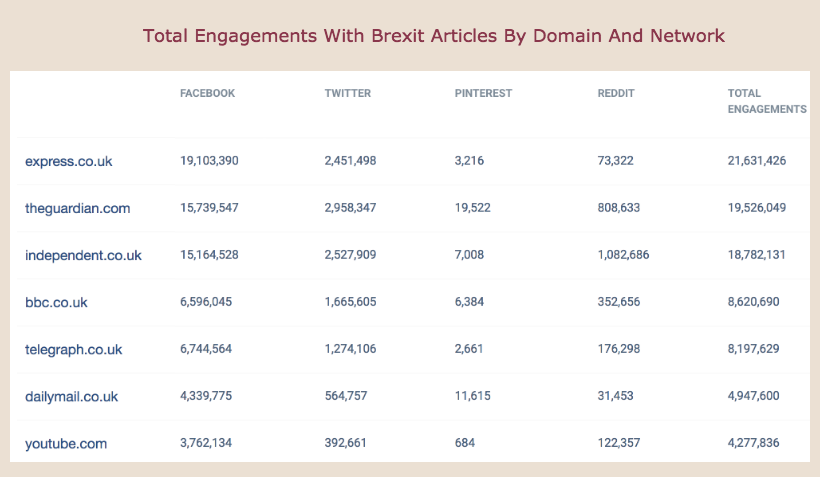 The three dominant sites are all large and popular sites but it is surprising that the level of social engagements with Brexit articles published by just these three sites is so dominant. It is also surprising that sites such as the Express, Independent and The Guardian have more than twice as many social engagements with their Brexit articles than the BBC, which has far more website visitors. The BBC is ranked the seventh most visited website in the UK while the Express is ranked fiftieth and the Independent doesn't make it into the top 50. So why does their content get more social engagement?

One reason might be the tribal nature of content on these top three sites. For example, The Guardian and the Independent are staunchly pro-remain whereas the Express is pro-leave. This is reflected in some of their most shared Brexit articles over the last two years, for example:

The great British Brexit robbery: how our democracy was hijacked
Michael Bloomberg: Brexit is stupidest thing any country has done besides Trump
More than 100 seats that backed Brexit now want to remain in EU

The Tories have voted that animals can't feel pain as part of the EU bill, marking the beginning of our anti-science Brexit
As a British EU negotiator, I can tell you that Brexit is going to be far worse than anyone could have guessed
Brexit: Vote Leave chief who created £350m NHS claim on bus admits leaving EU could be 'an error'

European Union - EU boss threatens to break up US in retaliation for Trump Brexit support
Brexit: Britain '£156 billion a year better off WITH NO EU deal'
Nexit - more than half of Dutch voters want to follow Brexit and leave the EU, poll shows

By contrast the BBC content is less tribal, many of its most shared Brexit articles are news based rather than opinion based such as:

I think this provides some initial evidence that more partisan content gains more social engagement. I explore this further below.

When I looked at the type or format of content that gets social engagement I found that 'why' posts and 'list' posts (any title starting with a number) had the highest levels of engagement. 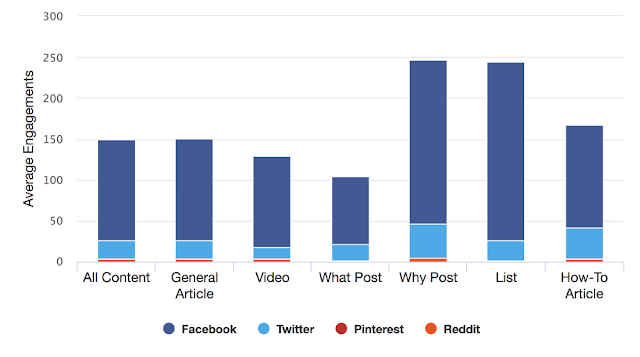 The higher levels of engagement with 'why' posts might suggest that people are actively looking for information and wanting to share useful information. Some 'why' posts do tend to be less polemical and partisan such as:

However, the majority of 'why' posts that get well shared are still very partisan. Here are some of the most shared 'why' posts:

List posts are typically more viral and get relatively high levels of shares, see my BuzzSumo research. This Buzzfeed post 27 Brexit Tweets Guaranteed To Make You Laugh, Cry, Or Probably Both gained over 30,000 shares. However, even list posts are used in a partisan way, for example:
10 reasons 'no deal' Brexit would be bonkers 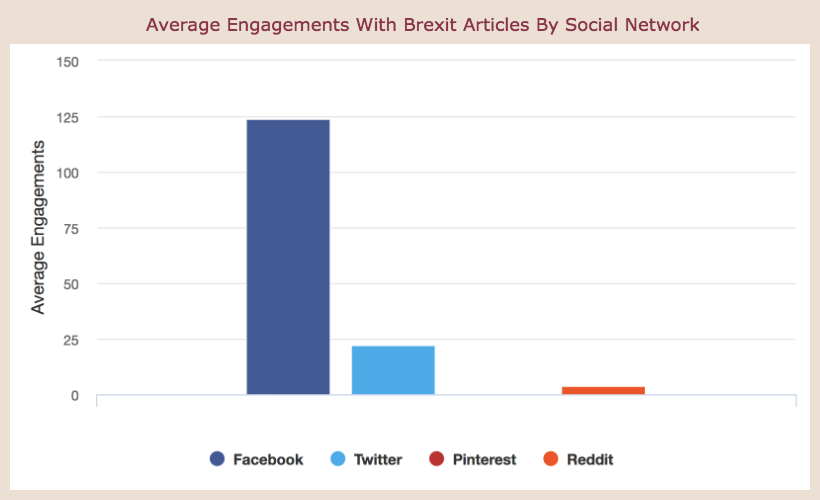 There is a correlation of 0.48 between Facebook Engagements and Twitter engagements. Whilst correlation is not causation this indicates that posts that do well on Facebook may also do relatively well on Twitter. By contrast there is a much smaller correlation between Facebook and Reddit of 0.18. This may reflect the difference nature of the audiences on these two social networks. 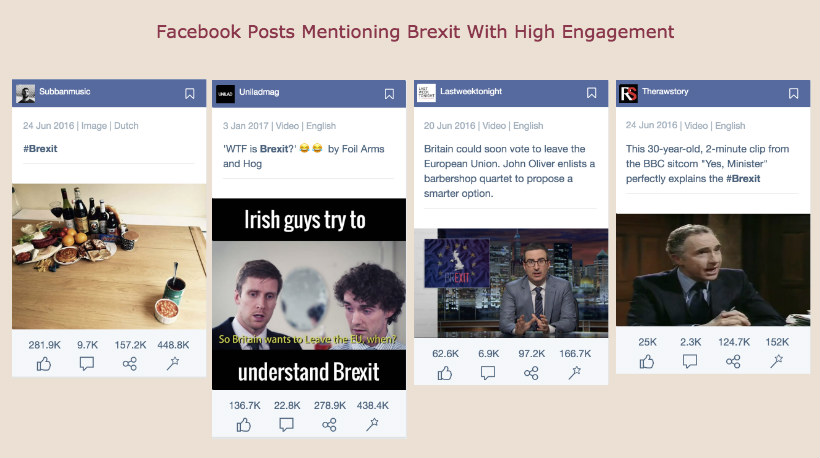 The few serious Facebook posts that made it into the top 20 most engaging posts on Brexit included a Channel Four post on Angus Robertson refusing to be part of "a diminished little Britain" (223,000 engagements) and a BBC post on the House of Lords vote to guarantee EU nationals' right to stay in the UK (128,000 engagements).

From this brief analysis it seems people widely share serious articles about Brexit on Facebook but the actual Facebook posts about Brexit that get most engagement are amusing posts with images and videos.

On YouTube the John Oliver video on Brexit was the most popular but a one hour Brexit The Movie video published in May 2016 and designed to inspire people to vote leave was shared over 200,000 times and viewed 2.8m times.