The Victory Lab: The Secret Science Of Winning Political Campaigns

Winning elections is not just about persuading people to your point of view, to win elections you need to ensure: 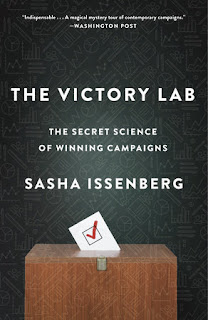 Increasing the turnout of your supporters by just a few percent can be the difference between winning and losing an election. It can actually be more significant and critical than trying to persuade people about your policies. A meta-study in 2017 looked at 49 field experiments and concluded that campaign efforts to win over opposing supporters and undecided voters were largely unsuccessful. However, they found campaigns can mobilise your own supporters.

In the The Victory Lab (2013) Sasha Issenberg reveals the thousands of experiments that have been conducted by political parties over the last 50 years to improve registration and turnout. This is an important area that has been under-reported by the media. Only the recent Cambridge Analytica scandal has prompted any significant coverage of experiments to increase turnout and target voters. Thus it is useful to look in some detail at the secret science of political campaigns.

To understand the importance of turnout let's look at the 2016 US presidential election. In this election turnout was 61.4% (see Pew Research).  This may seem low but back in 2000 it was even lower at just 50.3%.

Turnout rates and nonvoting varies considerably by demographic groups, as we can see from the chart below. 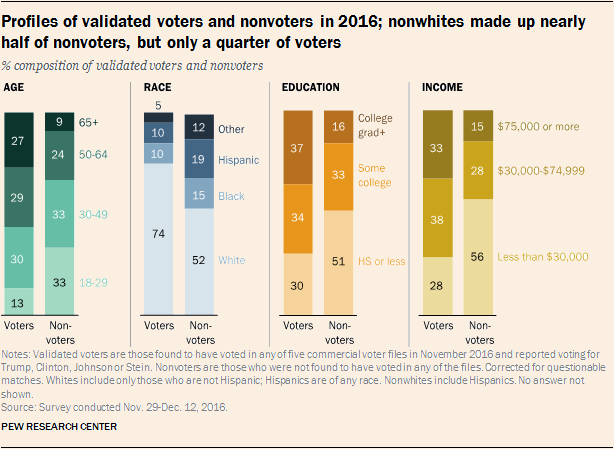 If your supporters are more likely to be younger voters or hispanic voters then a strategy to maximise turnout in these groups would be a critical part of your campaign.


You don't want to encourage people who are likely to support your opponents to register or turn out to vote. It may be good for democracy as a whole but it is not very effective campaigning. The key is to identify and target your supporters, and the undecided voters who may vote for you.

So how do you identify these people?

Traditional canvassing, actually speaking to people, is one of the best ways to identify and record supporters but it has limitations. No campaign has the resources to speak with the whole electorate to find their preferences.

Political researchers therefore developed profiles of demographic groups to predict voter behaviour. Ithiel de Sola Pool, an MIT political scientist, used detailed data from 130,000 respondents to divide US voters into 480 voter types. He then conducted a poll in 1959 to get the views of each 'voter type' on 52 issues. This enabled him to profile the attitudes of specific demographic groups such as say Eastern, metropolitan, lower-income, white, catholic women. He could then infer from the sample how the majority of each of the 480 groups might vote.

Modern political consultants have taken these original ideas much further and developed far more fine grained approaches. For example, Issenberg highlights how they have built statistical algorithms based on known information about a small group of voters which can then be extrapolated to find other similar voters. (Kindle Location 3296 )

Issenberg explains how Alex Gage, working on the Romney campaign in 2002, used algorithms to find patterns that linked personal characteristics with political beliefs by merging consumer records with traditional political records. (Kindle Loc 1795) Gage took a test set of 5,000 state voters on which he had detailed consumer and political data. His team called each of them to ask twenty questions about politicians and issues from abortion to trade unions. Gage's algorithms then looked for patterns that he could use to predict how the other 5m people in the state would vote.

Gage used this data to pioneer what is called 'micro-targeting', in essence building a profile of each individual using consumer records and political data. Gage grouped people into “target clusters” with names such as “Flag and Family Republicans” or “Tax and Terrorism Moderates.” Each group was then targeted with specific messages that would resonate with them.

The concept of micro-targeting was taken to a whole new level by the team working on Obama’s re-election campaign in 2012. They combined more quantitative and quantitative data on individuals than any other campaign. They didn't simply identify specific groups of voters they targeted individual voters based on detailed data about those voters. Each voter was given a turnout score based on their likelihood to vote and an Obama score, namely their likelihood to vote for Obama. (Loc 5435)

The Obama campaign also had to deal with the Bradley effect. In essence, polls overstate support for black candidates.  The campaign tried to identify potentially racist voters, for example by identifying the people who their algorithms said should be Obama voters but who identified themselves as McCain voters. After much testing they found a question which helped them identify these voters, namely “do you think your neighbours would be willing to vote for an African American.”  Those that answered 'no' correlated with McCain support when normally their profile indicated they would be an Obama supporter. This question was then used by the campaign assess how open a voter was to supporting a black candidate.

Even if you have identified your target supporters, they are not always easy to reach. For example, the Obama campaign found through a process of testing that online ads and street teams were the best ways of reaching young people. This led them to remove the budget they had set aside to target young people via TV.

It is also important to target undecided voters as these are a focus for persuasion campaigns. Hal Malchow, who worked on the 2008 Obama campaign, found that low educated voters with more children were the most undecided on which way to vote.

Getting Target Voters to Register


Once you have identified your target voters the first stage is to get them registered to vote.

The Labour Party in 2017 targeted students with Facebook messages encouraging them to register to vote.

Matt Reese who worked on the Kennedy primary in 1960 targeted nonvoters and undecided voters as potential Democrat supporters and added 4m people to the electoral rolls.

Issenberg highlights how the 2008 Obama campaign targeted 17 year olds who would become eligible to vote by the November 2008 election. They targeted high school students by acquiring lists such as high school seniors who has taken the ACT college admissions test. The campaign also had student supporters gather school directories and call those who would become eligible to vote.

Getting Out The Vote (GOTV)


One of the major tasks in any campaign is getting out the vote of your supporters and this has been the focus of extensive research and testing.

Issenberg highlights how Blaise Hazelwood ran over 50 experiments from 2000 to 2001 to assess how to increase voter turn out. One experiment found that simply sending new Republican registrants with information on polling place details increased turnout by six points. Another experiment found that calls by volunteers increased turnout by five points over calls made by paid call centre staff. This is probably because rather than following scripts the volunteers were spontaneously conversational and enthusiastic.

People feel some social pressure to vote. For example, studies have found that many people say they voted in an election when in reality they did not vote. One survey found that 10% more people said they voted than actually voted.

Alan Gerber decided to test if social pressure could increase turnout. He designed and sent four letters to four different groups of voters. The first letter said do your civic duty - vote, the second said you are being studied (in the US, public records show who has voted) but the results will be confidential. The third letter reminded people that their voting record was public and showed their past voting record. The fourth said the voting patterns of their community was being studied and they would publish the results highlighting both those that had voted and those that had not voted after the election. This last one was controversial and elicited some angry feedback, however, it was almost three times as effective in increasing turnout. It does seem that social pressure can cause people to vote.

Interestingly in another survey people who were told they were an above average citizen were also more likely to vote. Changing how people see themselves also changes behaviour. (Loc 3234)

It seems that simply asking people to vote can be effective. However, asking people when they plan to vote i.e. at what specific time, rather than just prompting or asking them to vote, is even more effective. The specific visualisation appears to make it more likely people will undertake the task.

Issenberg also highlights the many studies of Gerber and Green and their conclusion that 'door to door canvassing is the gold standard' in contacting voters and persuading them to vote. The political campaigns appear to have taken note. In her book 'Consumer Democracy' Margaret Scammell reports that in 1992 20% of US voters reported a personal contact from one of the political parties by 2008 it had risen to 40% (Loc 662). It is worth noting this gives the Democrats an advantage as their voters are concentrated in cities whereas the Republican voters are more geographically distributed.

Fred Steeper found that emotional issues and reactions could drive people to vote. Steeper found that anger was a strong motivator in mobilising supporters. When he analysed how George Bush senior had lost to Bill Clinton he found people were angry about unemployment and the economy.

Politicians are not the only ones carrying out experiments. In the 2010 US congressional elections, Facebook sent a voting reminder to 61 million US users. A team from Facebook, along with researchers from the University of California at San Diego, analysed the impact of the button on voting. The study found that users who saw the 'voter button' were more likely to vote. It has been argued it was the most effective single voter activation tool ever built, creating 340,000 additional voters. Facebook have subsequently used the voter button for many elections including the Scottish referendum.

Facebook have used different variations of the 'voter button' but has not revealed these variations or which buttons worked best. The Guardian has raised concerns about these experiments, for example 'could Facebook potentially distort election results simply by increasing voter participation among only a certain group of voters – namely, Facebook users?'

Looking at turnout also raises bigger questions about the design of the democratic system. If you feel your vote makes no difference, for example in a first past the post electoral system, you may be less inclined to vote.

Finally, studies of mico-targeting have questioned its effectiveness in winning over undecided or opposing supporters but there does seem to be a growing consensus that it can reinforce the views of supporters and mobilise supporters. This mobilisation might range from simply sharing content to financial donations, volunteering and voting.


People may be surprised by the thousands and thousands of experiments, surveys and tests run by politicians, consultants and Facebook to increase registration and turnout. It is an area that has been traditionally under-reported by the media. The recent Facebook controversies about manipulation have made people aware, possibly for the first time, of the personal data being collected for profiling, experimentation and the micro-targeting of political messages. The Victory Lab provides a timely, rich and in-depth history of the secret science behind political campaigns.