Is Identity Politics Driving Polarisation and Fragmentation? Fukuyama and Identity 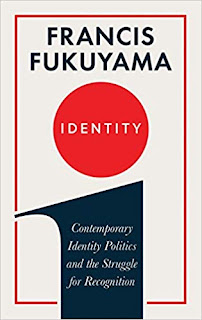 "Identity politics has become a master concept that explains much of what is going on in global affairs."

Francis Fukuyama's forthcoming book on Contemporary Identity Politics and the Struggle for Recognition (4th October 2018) will lay a lot of the blame for the current polarisation of society at the door of identity politics. Fukuyama makes his position clear in an essay published this week: Against Identity Politics. He argues that identity politics threatens the possibility of deliberation and collective action by society. This new tribalism may lead to a crisis of democracy, state breakdown and, ultimately, failure.

I suspect there will be quite a backlash against some of Fukuyama's ideas. Already people are arguing on Twitter that Fukuyama sees 'identity politics' as what discriminated against minorities do and 'politics' as what white men do. His book and ideas though will add to the debate around global politics, polarisation and the role of identity politics.

The Rise of Identity Politics


Fukuyama argues there is an important shift taking place in politics, namely a shift from economic and ideological issues to a focus on questions of identity. He believes the economic and social change driven by globalisation has made societies more diverse and led to demands for recognition by a wide range of groups. He also argues that social media and the internet have facilitated the emergence of self-contained communities and groups "walled off not by physical barriers but by shared identities".

Political leaders have engaged and mobilised these groups through the idea that their dignity has been affronted and must be restored. Fukuyama argues the rise of identity politics began on the left but has been adopted by the right. He believes "Trump’s rise did not reflect a conservative rejection of identity politics; in fact, it reflected the right’s embrace of identity politics." In this case it was the identity of white working americans, who felt invisible to the elites in Washington, that Trump appealed to. Others may argue that identity politics on the right is not new, witness white nationalism.

Academics have long noted the potential importance of identity. Dahlgren stated it is “the most compelling link between civic cultures and the sense of agency that engages people and can help turn them into political participants.” (2009, p123)

Fukuyama believes that most left-wing parties have shifted their strategy "from building solidarity around large collectivities such as the working class to focusing on ever-smaller groups that find themselves marginalised." Indeed, many on the left he argues saw the traditional working class "as a privileged stratum that demonstrated little sympathy for the plight of immigrants and racial minorities. They sought to expand the rights of a growing list of groups rather than improve the economic conditions of individuals. In the process, the old working class was left behind."

This has resulted in white working-class voters, who formed a critical part of Democratic coalitions from the New Deal onwards, defecting to the Republican Party in recent elections. See more in my post on The New Working Class.


Fukuyama argues the preoccupation with identity has undermined the rational discourse needed to sustain a democracy and that identity politics poses a threat to free speech.

"The focus on lived experience by identity groups prioritises the emotional world of the inner self over the rational examination of issues in the outside world and privileges sincerely held opinions over a process of reasoned deliberation that may force one to abandon prior opinions. The fact that an assertion is offensive to someone’s sense of self-worth is often seen as grounds for silencing or disparaging the individual who made it."

Identity politics is constantly shifting and previously acceptable ways of talking might now be insensitive to specific groups or even offensive. Fukuayama gives the example, that "merely using the words “he” or “she” in certain contexts might be interpreted as a sign of insensitivity to intersex or transgender people. But such utterances threaten no fundamental democratic principles; rather, they challenge the dignity of a particular group."

You can debate and compromise over economic policy Fukuyama argues but it is much harder to reconcile identity issues based on lived experiences.

Identity politics, Fukuyama argues, has diverted energy and attention away from serious thinking on how to reverse the trend in most liberal democracies toward greater socioeconomic inequality.

How Do We Go Forward? Creedal National Identities?


Fundamentally Fukuyama believes "democracies need to promote what political scientists call “creedal national identities,” which are built not around shared personal characteristics, lived experiences, historical ties, or religious convictions but rather around core values and beliefs."

Whilst we all have multiple identities defined by our race, gender, workplace, education, affinities, and nation Fukuyama believes it is also possible to create identities that are broader and more integrative.

"One does not have to deny the lived experiences of individuals to recognize that they can also share values and aspirations with much broader circles of citizens. ....So although no democracy is immune from identity politics in the modern world, all of them can steer it back to broader forms of mutual respect."

Fukuyama argues citizens should be attached to the principles and ideals of the country. He argues European conceptions of national identity based on ethnicity should be replaced with a set of beliefs and a way of life. He gives the examples of America's belief in human equality, the rule of law and democratic values set out in its constitution and the French concept of republican citizenship built on the ideals of liberty, equality, and fraternity.

When it comes to immigration Fukuyama argues citizens should be "encouraged to identify with a country's foundational ideals" and "use public policies to deliberately assimilate newcomers". He argues a nation state cannot build its national identity on diversity. A workable creedal national identity has to offer substantive ideas, such as constitutionalism, the rule of law, and human equality; and a country "is justified in withholding citizenship from those who reject them."

Thus on immigration Fukuyama argues "The real debate should instead be about the best strategies for assimilating immigrants into a country’s creedal national identity. Well-assimilated immigrants bring a healthy diversity to any society."

Fukuyama's new book 'Identity' is published in October 2018 and I anticipate it will generate a fair amount of debate on the role and nature of identity politics.