How Older Towns and Younger Cities Are Reshaping Politics

One of the defining issues that emerged from David Goodhart's book The Road to Somewhere was the distinct geographical locations and identities of what he defined as the Anywheres and the Somewheres. The Somewheres are more likely to be found in towns and villages and the Anywheres are more likely to be found in the cities. Recent research from the Centre for Towns has found that villages and towns are getting older while cities are getting younger.

The following chart from the Centre for Towns reveals the changing population structure of towns and cities over the thirty years to 2011.

What is noticeable is how small towns, villages and communities are ageing. By contrast core cities not only saw a decline in the numbers of people aged 65+ they had a surge in 25 to 45 year olds.

In political terms we are seeing Labour and Remain support grow in major cities but Conservative and Leave support grow in towns and villages. The lead that Labour previously had in towns has been converted into a significant lead for the Conservatives over the last ten years. Equally in many city suburbs Labour are making major gains.

Since 2000 there has been a marked change in cities getting younger while towns and villages get older. The chart below shows dependency rations, in essence the number of people over 65 for every 100 people of working age. 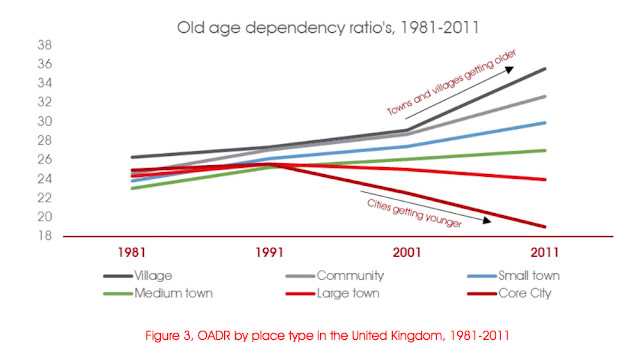 Many towns are suffering economically, often they were based around single industries that have disappeared and young people feel they have little choice but to move to find career opportunities. The impact of online shopping is hollowing out many town centres and this is accelerating. Marks & Spencer is the latest retail company to announce store closures. The latest stores to be closed include Stockton, Walsall, Northampton and Dover. The UK is becoming a divided country not just in terms of class, age and education but also in terms of location.