Whose GDP Is It Anyway?

During the UK Brexit referendum there was an exchange which highlighted the differences between experts and the public.

During one debate Europe expert, professor Anand Menon, made the point that leaving the UK would reduce the UK’s GDP which would be bad for everyone. One woman in the audience retorted “That’s your bloody GDP. Not ours.”

The woman was ridiculed by many for not understanding economics and the importance of GDP. However, her analysis was far more accurate than many of the experts.
It is simply not the case that a rising GDP tide lifts up everyone. Consider the chart below. 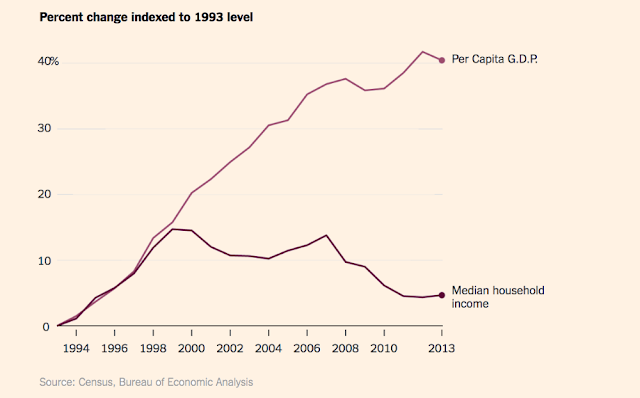 From 2000 to 2013 GDP rose strongly in America but over the same period median incomes fell. Over fifty per cent of the population saw their incomes fall. You can argue all you like about the benefits of increasing GDP but if the additional wealth created goes almost entirely to a small economic elite, it will have little impact on working class voters.

GDP growth may be a good thing but a more equitable distribution of the benefits would be even better.