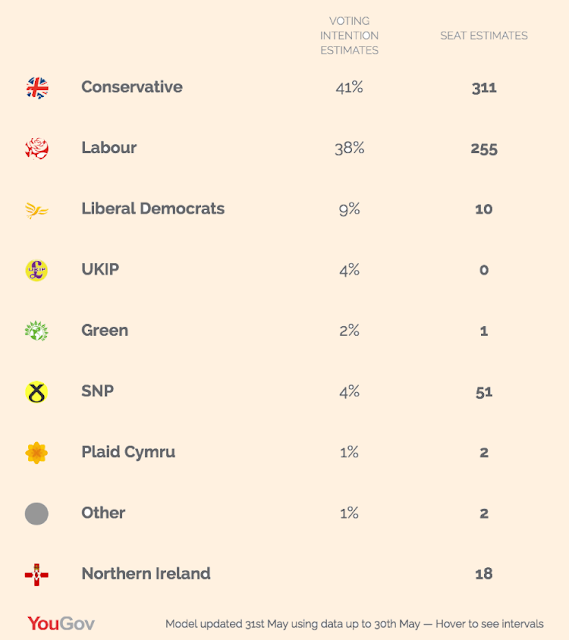 YouGov have produced a new election model which they will update every day until the day of the election. This model provides seat estimates for all 650 Parliamentary constituencies.

This model as at 31st May is currently predicting a hung parliament. The figures are set out above.

By contrast Electoral Calculus are currently predicting a Tory majority of 88, see their estimates below. 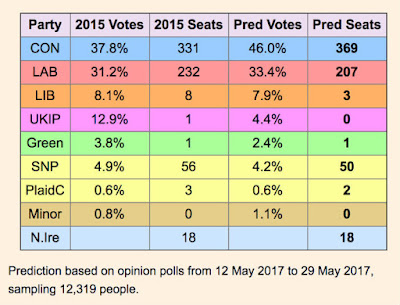 The models are very different with Electoral Calculus using a poll of polls approach and YouGov conducting at least 5,000 daily interviews with registered voters from the YouGov panel. The Electoral Calculus polling data is also older (12 - 24 May) and may not fully account for the recent swing towards Labour. However, if the Electoral Calculus model used the same voting percentages as YouGov the model would produce a Tory majority of 16 based on a uniform national swing.

The big differences between the polls and the various election models are partly due to turnout assumptions, particularly about young people. The Labour Party's proposals to abolish tuition fees have seen the Party gain a lead of 59% among 18-24 year olds. A key factor in the election will be the turnout of this age group, less than 50% of them voted in the last election.

Anthony Wells covers this issue on his UK Polling Report site. He points out that the recent ICM poll had a Tory lead of 12%. However, this would have been a Tory lead of only 3 points if it was not for its turnout model, which predicts how likely respondents are to vote based on the estimates of turnout by age and class at the last election. In essence they assume many young people will not vote despite saying they will. As he says "given the errors in the polls in 2015 that may be necessary. On the other hand, if Jeremy Corbyn has managed to enthuse young people and there is a higher rate of turnout among younger voters than in 2015 then it risks understating Labour support."

The Hove constituency is one example where the two models make quite different projections. YouGov have it as a safe Labour seat whereas Electoral Calculus have the Tories winning, albeit by a whisker.