The Reality Of Raising Taxes In The UK 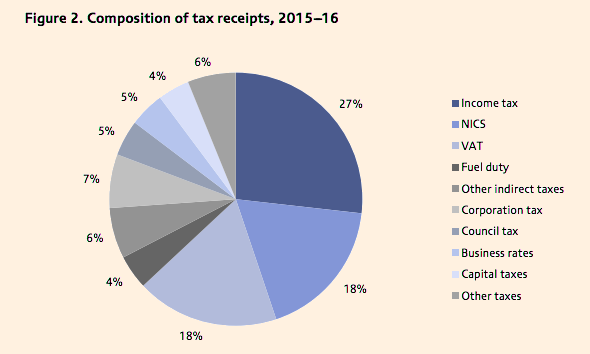 The draft Labour Party manifesto promises in the words of Guardian columnist Polly Toynbee a "cornucopia of delights".

If I had £250bn I might also spend it building houses and investing in health and social care as the Labour Party proposes. The big question is how you fund these proposals. Typically it is a mix of borrowing and tax.

On tax the Labour Party have said they won't raise income tax for 95% of people, those earning over £80,000, or increase National Insurance or VAT. These three sources of tax raise almost two thirds of all tax in the UK as we can see in the above chart from the IFS. Which is why Cameron's triple lock policy of not increasing these taxes was madness. The Labour Party also say they will increase corporation tax which raises 7% of tax at the moment to fund their programmes.

There are a number of practical problems of increasingly targeting rich taxpayers and companies.

A Narrow Tax Base

The IFS have already warned that the UK is increasingly reliant on a smaller group of people for tax revenues. 44% of the UK population now pay no income tax. The proportion of income tax paid by the top 50% of tax payers has increased to over 90% as we can see below. 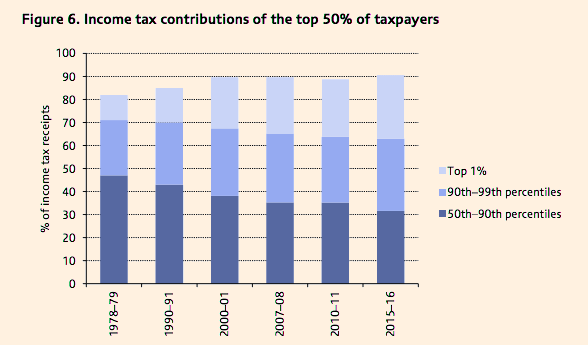 Probably more significantly the proportion of tax paid by the top 10% has increased to around 60%.

The proportion paid by the top 1% has grown from around 10% of all income tax receipts to over 25%.

I don't want to argue that tax paid by the rich should be increased or decreased but simply point out the problem of relying on a narrower and narrower tax base.

The IFS says "an income tax base that increasingly relies on a smaller group of taxpayers is .. more unpredictable and risky."

I have written before about the Laffer Curve. In simple terms there comes a point with every tax when raising the top rate actually reduces tax receipts. 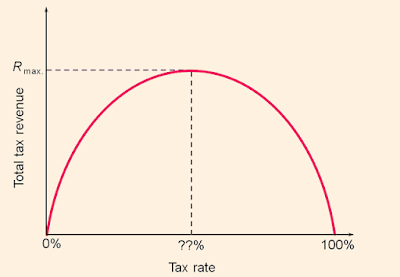 I would argue this has already happened with Stamp Duty. People avoid the tax by not moving and the number of higher value housing transactions has slumped since George Osborne increased Stamp Duty.

In aiming to significantly increase the tax paid by companies and high earners the Labour Party is targeting two very mobile groups. Let us set aside whether it is good thing or not to raise their tax rates.

The reality is that many in these groups can move to avoid higher tax rates. Whether we are near the peak taxation revenue point for corporation tax or income tax is open to debate. But what is not open for debate is that there comes a point when raising these tax rates will not increase tax revenues.

In my view the Labour Party are naive in thinking they can simply raise tax revenues in proportion by increasing tax rates. Corporation tax in the UK is 19%, the Labour Party have talked of increasing this to 26%. In Germany corporation tax is 15% and Trump has talked of reducing US corporation tax to 15%. In Ireland it is 12%. There comes a point at which raising taxes will cause mobile companies to relocate away from the UK, Brexit could also increase these pressures for some companies.

There are no easy answers but it seems to me that to get the sustainable level of investment we need in public services we need everyone to pay more tax, including richer taxpayers, and we need to widen the tax base.

The Lib Dems have at least proposed raising income tax by 1% for everyone. The Labour Party in saying that we can significantly increase public spending without increasing tax for 95% of the population are perpetuating a dangerous fiction.

Borrowing £250bn through a national investment bank to invest in infrastructure may be a good thing but it is not free money and needs paying back at some point through taxes.