If This Was A Facebook Election Labour Would win 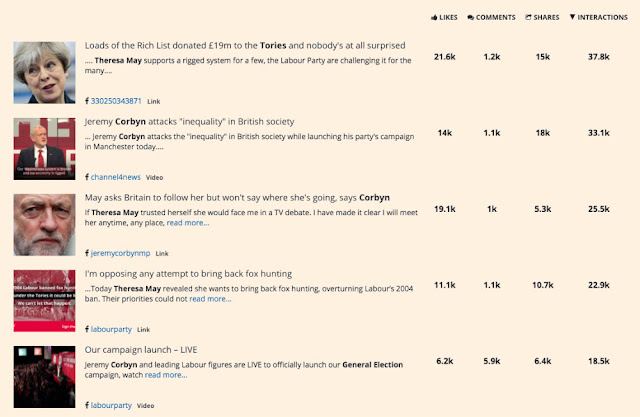 Above are the top five Facebook posts about the UK General Election this week, measured by the most interactions (likes, shares, comments). They are all pro-Labour. Figures from BuzzSumo.

It seems the Corbynistas that mobilised to support Jeremy Corbyn to win the leadership are continuing to do a good job at driving the sharing and liking of Pro-Corbyn Facebook posts. Last month there were over 500,000 interactions with posts just on Corbyn's official page.

The numbers interacting with posts are relatively small but these interactions mean that Pro-Corbyn posts are being seen by many millions of people. However, many of these people will be the converted, people who already like Pro-Labour posts. Other parties with the help of companies such as Cambridge Analytica are targeting swing voters with Facebook ads rather than the converted.

On Facebook it has been said that those that shout the loudest get heard. A vocal minority can drive a lot of sharing but of course it doesn't mean Labour are on course for an election victory.