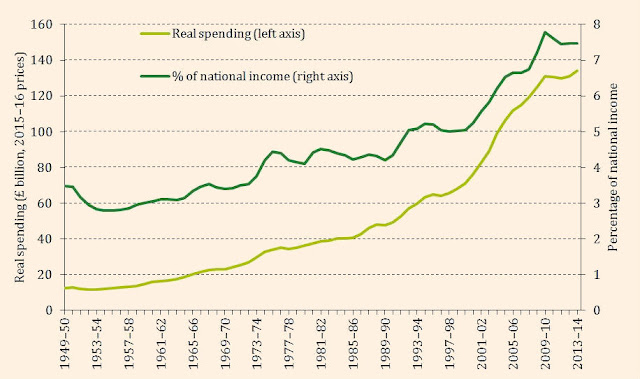 The chart above from the Institute of Fiscal Studies shows the growth in health spending in the UK.

Spending in real terms has doubled since Tony Blair came to power in 1997 and spending as a percentage of national income has also grown. Despite this growth the NHS remains under pressure from population growth (spending per person has also increased), staff salary costs and increasing treatment costs.

In this general election will we get an honest debate about health and how we fund it in future? Will we stop pretending that more efficiencies or different spending priorities will fix things?

A free at the point of need NHS is expensive and the costs will only grow. Yes, we can cut back in other areas like defence but realistically even cutting say £10bn from defence will only make a small dent in the growing health costs. There needs to be a real debate about the future of healthcare and how we fund the NHS.